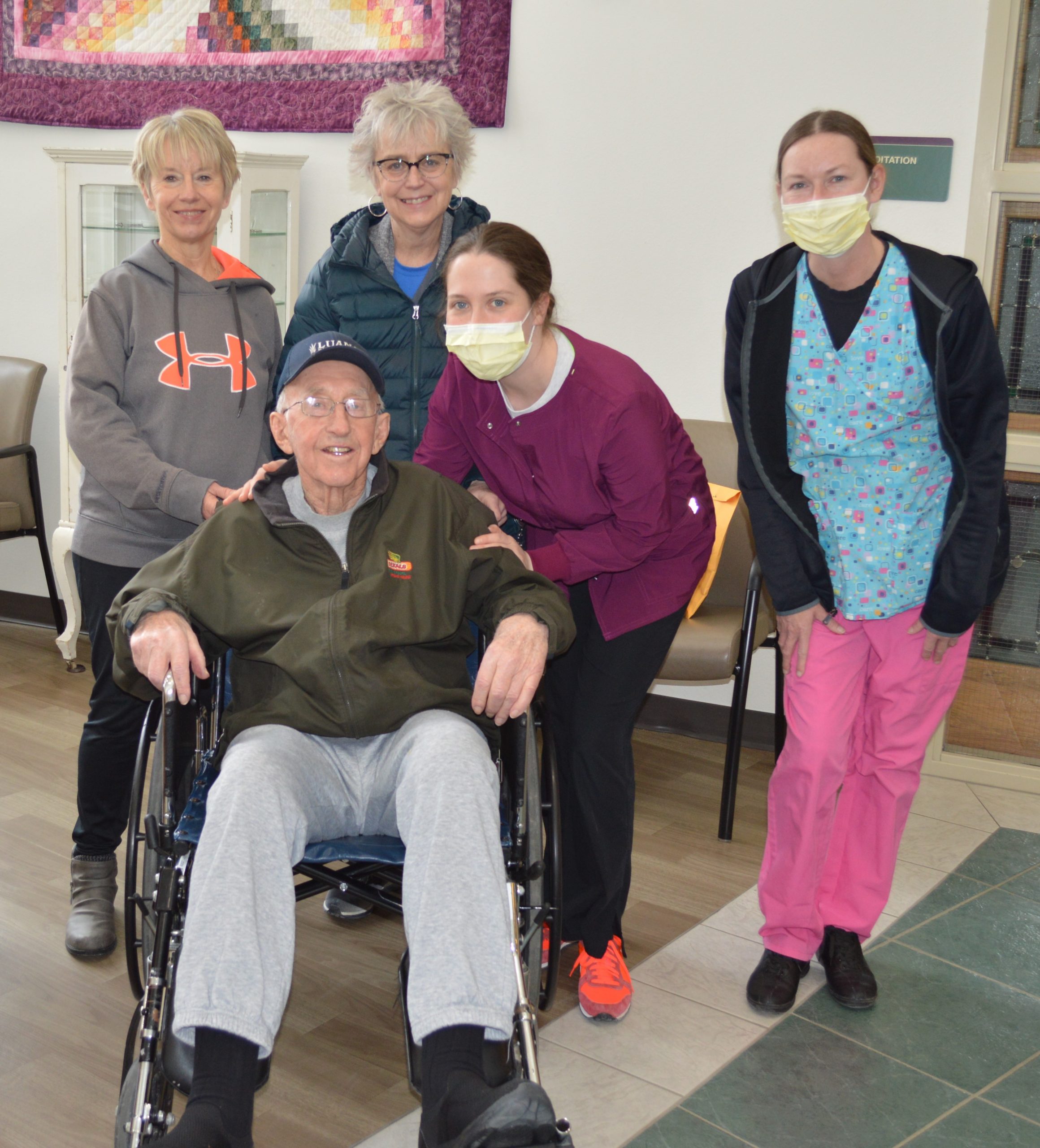 Skilled care is a level of hospital care offered at Veterans Memorial Hospital often found to be a very helpful option to the spouse or caregiver of a patient not quite able to go home following a surgery or accident. Pictured is Ron Fox of Postville, leaving his skilled care stay at Veterans Memorial Hospital with is two daughters, left to right, Debbie and Diana, assisted by hospital nursing staff Chaya Klein, RN, and Denise Beisker, C.N.A. Ron is a grateful patient for the skilled care he received at the hospital last winter.

Skilled care is a level of hospital care offered at Veterans Memorial Hospital often found to be a very helpful option to the spouse or caregiver of a patient not quite able to go home following a surgery or accident.  Medications are given, pain is controlled and the patient qualifies for more rehabilitation than if they are discharged directly to their home.

All skilled level patients are taken to their rehabilitation therapy sessions twice per day, Monday through Friday, plus once on the weekends.  Patients who are discharged directly to their home only qualify to receive therapy three times per week, plus the caregiver has to load them up and bring them in for their therapy each time, which can be very exhausting for both the patient and caregiver.

Ron Fox of rural Postville is a grateful patient for the Skilled Care offered at Veterans Memorial Hospital.  Last winter he slipped on his front steps, hitting his hip, which further aggravated the compression fractures he already had in his back.  The Postville Ambulance Service came to his farm and safely transported him to Veterans Memorial Hospital.  He was admitted as an acute care patient and began his road to recovery.

Ron had been out golfing in early May of 2021, when he gave the club an extra hard swing wanting to really nail it and felt pain in his back.  After visiting Dr. McMullan’s office in Postville, he found out that swing had caused two compression fractures in his back.  He began therapy at Veterans Memorial Hospital as an outpatient, driving to Waukon three times a week.  Due to his age, his bones were not healing very quickly, causing much pain and heartache.

Following his slip on his front steps, three other compression fractures were also found that had happened earlier that he was not even aware of.  The rehabilitation department at Veterans Memorial Hospital began working intensely with Ron throughout his acute stay, then transferred him onto Skilled Care where he could remain in the hospital and still receive that helpful therapy twice a day, and on the weekends.

“I was doing so good in the hospital that they transferred me over to skilled care so I could continue.  The therapists were also good to me, taking me down to the Healthy Lifestyles Rehabilitation Center every day, starting right after I was admitted to the hospital, to exercise and help me get around,” explains Ron.  “The ultrasound they used on me felt so good.  They are so kind and treat you so nice…it is unreal.”

Following Ron’s stay on Skilled Care, he was transferred closer to home to Postville Good Samaritan Center, where he has continued his rehabilitation and enjoys all of the activities offered, especially playing cards.

“Ron did everything he was told by his healthcare team.  His goal is to continue to get stronger so he can return to his own home,” states Amy Robinson, P.T., Rehabilitation Director.  “Ron was impressed that he could get one on one therapy here at Veterans Memorial Hospital.    He didn’t want us to put him on an exercise bike and leave him.  The individualized experience was very important to Ron, and I feel that helps with the healing process”

Melissa Clark, O.T., was Ron’s Occupational Therapist at the hospital.  She adds, “Ron was an amazing patient.  He worked very hard and was always agreeable to all treatment activities.  Even though he was limited when his pain hit, he would always do what he could and participated to increase his strength and independence.”

Patients who have a surgery or hospitalization at any other health care facility may qualify to return to Veterans Memorial Hospital for the advantages of skilled care.  Laura Sorenson, Social Worker and Discharge Planner at Veterans Memorial Hospital, will connect with the social worker at that facility, and help make the arrangements for patients to be transferred back here, closer to home for their skilled care.

“We see the skilled level patients accelerate in their recovery much faster than the patients who elect to go home right away,” states Amy Robinson, P.T., Director of Rehabilitation at Veterans Memorial Hospital.  “Having therapy twice a day instead of just 3 times per week really helps them advance in their recovery and allows them to be much more independent and safe in their own home.  We all encourage patients to ask to see if they quality, because they may never be offered this level of care, unless they ask.”

For more information on skilled care or for help making arrangements to come to Veterans Memorial Hospital for skilled care, please call Laura Sorenson, Social Worker and Discharge Planner at the hospital at 563-568-3411.

Monkeypox: Facts from the Centers for Disease Control (CDC) 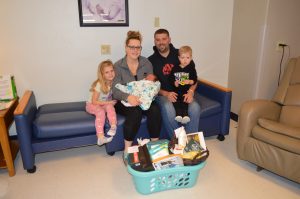 First Baby of the Year Born at Veterans Memorial Hospital 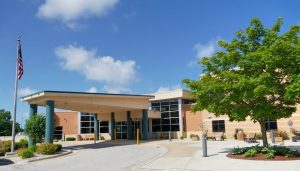